At their meeting on Wednesday night the Cashmere Rotary Club awarded Donald and Margaret McCaw each with a Paul Harris Fellowship Rotary Award for their services to the Community. This was very much a family affair with both Richie and his sister Joanna present and the award took Donald and Margaret totally by surprise as they thought they were coming to listen to Jo be the guest speaker at the meeting.

The Paul Harris Award is one of the top awards of Rotary International and only a few are made by each Club each year. Other Paul Harris Fellows, include U.S. President Jimmy Carter, Russian President Boris Yeltsin, U.S. astronaut James Lovell, UN Secretary-General Javier Perez de Cuellar, and Jonas Salk.

The citation awarded by President Geoff Miller described how Donald and Margaret had played such a pivotal role in providing their son and daughter with encouragement and support to achieve excellence in their chosen sports. In addition Donald and Margaret have been very active in their local communities with Donald and his family being instrumental in setting up the North Otago Gliding Club which was based on the family farm for a number of years. Margaret has also been involved in many local Kurow organisations including Plunket, and the squash club.

After the presentation of the awards Jo and Richie spoke of how much their parents had helped them reach their goals leading to Jo’s success with Netball Canterbury and Richie’s success with the All Blacks. 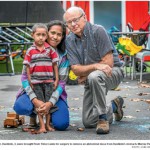