Congratulations to Ngaire who received a Paul Harris Fellowship citation in front of her son, Duncan at our changeover night. Ngaire comes from Temuka in South Canterbury. After attaining a B. Com, she and her husband settled in Hawkes Bay and she had a variety of jobs until later in life when she resumed tertiary education with a degree in Social Work, which led to a difficult DSW job dealing with many vulnerable children and one she is shortly to retire from. As well as being a great Rotarian since 2003, Ngaire has been active at District level with the Match Student Exchange program.

Congratulations also to Gordon Hooper who received a Sapphire Pin to go with the Pauk Harris Award he received in 2004 for his huge contribution to Rotary’s international projects. 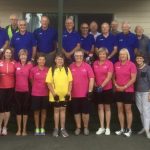 The Thinner Wheel cycling trip to Nelson a great successNews 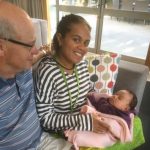