It was with great sadness that we lernef of the passing of PDG Gordon Hooper on 11 June 2022. Gordon’s contribution to Royary has been huge and has been recognised by Rotary with the a Paul Harris  Fellow award and 2 saphire pins.

Gordon joined Rotary in Wellington in 1972 and later in Rotorua, and Christchurch West / Cashmere in 1984 and quickly proved himself to be a ‘can do’ member. Serve To Change Lives Issue 2198 – 15 June 2022 2022 Rotary Theme 2013 – 2014 Engage Rotary – Change Lives In 1986 he asked the club to help raise funds for one of his employees, Alan Mackwell’s wife, Adrienne who urgently needed a heart transplant, which then could only be done in Sydney. We needed to raise $130,000 – and actually reached $142,000 in six weeks. (That would have bought two houses in 1986) Adrienne thrived for the next 16 years and died in 2002 from unrelated causes. A year later Gordon was instrumental too along with the late George Begg in the appeal to raise funds for a Cot Death Research Fellowship which raised $536,000 in two years, with the outcome in the reduction of cot deaths in Christchurch from around 30 to 5 per year. Gordon was club President 1989-90 and was awarded Rotary’s highest honour – a Paul Harris Fellowship in 2004 and effectively two more PHFs in the form of Sapphire pins, one from the club and one from the District for his work in the Pacific . In 2006, Gordon organised a team from the club to build ‘Rotahomes’ at the Korapita village in Lautoka, Fiji. I was one of them. We built three in the two weeks – hurricane proof simple structures with a semi detached TSK (toilet, shower, kitchen) units. To us a great garden shed but to the locals who were coming from temporary shanty ‘structures’ they were palaces. Gordon had the happy knack of being a great leader without acting like a boss. And we had fun too. All this was in spite of fairly his own dodgy health issues. He had by-pass heart surgery in 1996 and a diabetes diagnosis at the same time. He was playing tennis at a high level and as a front row forward in Golden Oldies rugby. I recall him telling us at Rotary one night that he had 8 out of the 9 factors for heart problems and Lindsay Acker sitting next to me said ‘and I guess the 9th is that you’re are not pregnant’ ‘That’s it’ said Gordon. His heart surgeon had told him more surgery was not a possibility. In spite of that, around 2010 he announced he would like to stand for District Governor. I have a good idea of the rigours of that job and I said to him ‘Don’t do it Gordon, it could kill you’ He was DG for the 2012/13 rotary year and two months after his term finished, had an aortic valve replacement. A decade or so later I commented to him ‘I think being a DG has kept you alive’ He said ‘You’re probably right’ A DG’s ‘year’ has a two year lead in and a long tail – more like a DG decade! His list of health problems was growing but he bore them with good humour and optimism – and two drops of cannabis oil a day. His work with RNZWCS was ongoing and time consuming – finding out what was needed, scouting hospitals and schools for equipment and materials and then packing and shipping. He has left us with big boots to fill! We will miss his wit, energy and positivity. His knowledge of Rotary was encyclopaedic and his contact list huge. 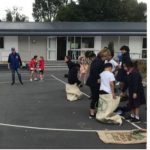