The History of The Rotary Club of Cashmere, Canterbury, New Zealand Inc,

The formation of the club was promoted by the Rotary Club of Christchurch South under the guidance of Arthur Milligan and held its first meeting on 15th October 1975. Weekly meetings commenced on 19th November 1975. The Charter was signed on 19th December 1975 and formally presented by DG Gordon Allen 6th March 1976, at a charter night at Riccarton High School.

The club was formed with all new members including 3 members who had previously been Rotarians in other clubs. 2 Charter members are still in the club, namely Alan Morgan and David Rankin. Over 82 people have been members of the club, not including current members. The first two women members were admitted to membership in the club in 1996/97 and in 2003 the club elected the first woman President, Mousie Skews.

Meeting venues have included the St John Ambulance Hall (Now the Irish Society Hall) in Domain Terrace, the     Suburbs Rugby Club Rooms in Mathers Road, the Old Stone House in Shalamar Drive and the Cashmere Presbyterian Church Hall. Our present venue is the Old Stone House which was  earthquake damaged in February 2011 and was closed for a number of years but is now fully restored. We used to have an annual combined meeting with the Lions club who were also based at the OSH.

Membership has been relatively stable, generally between 40 and 50 active members. Fellowship has always been an important focus of the club and there is good participation in most District sporting events and the club has organised the District’s Indoor Bowling event every year from 1976. An annual international dinner and “Guess who’s coming to dinner?” evenings have been important in building strong relationships as well as acting as fund-raisers.

In total, 48 Paul Harris Fellowships have been awarded by the club.

In 1989 The Rotary Club of Christchurch West Charitable Trust was formed by David Rankin and Ron Ricketts with a combined initial personal donation of $1,500. Since then it has benefited from club fundraising but remains at “arm’s length from the Club” and as such it can never be regarded as “Club Funds” though the Club has the right under the Trust Deed to direct the Charities to benefit from the Trust and appoints the Trustees.

In conjunction with the Sakai West Club, a Rota Home was provided in Fiji. In 1993 some members of the Christchurch West club attended the 10th Anniversary celebrations of the Sakai West club.

The club also sponsored three Probus clubs in their area.

The club established a high profile in the District as being one which was prepared to be involved in projects beyond the level of normal club activities. Many members served on District committees and the club had the responsibility for the organisation of two District Assemblies in 1985 and 1986.

Almost from the beginning the club gave priority to successful fundraising for projects. A Rotary Fair in the Spreydon Domain was first held on 12th March 1977 and was an annual event until 2000. An innovative approach was adopted to fund raising in 2000 by instigating a Rotary Internet Auction which raised over $12,000 of which the Rainbow Trust was the major beneficiary. A further Internet Auction raised $10,000 in 2001 and $8,500 in 2002, much of which was allocated to the Cholmondeley Children’s Home. The club replaced its annual Fair by holding Garage Sales which raised about $1,600 in 2001 but advancing technology overtook these activities.

In the early 1980s a “Bookarama” was held, when books were collected for re-sale, either through dealers or through sale stalls. Bookarama was revived in 2012 and is now the major fundraising activity with a sale of donated 2nd hand books, CDs, DVDs, jigsaw puzzles and artwork over 3 days involving most of the members and their partners at Addington Raceway Stables, raising up to $40,000p.a.

Gate keeping at the Lady Wigram International Car Racing later at Ruapuna and for sporting events at Lancaster Park and were annual fundraisers. Later, the club provided track marshalls for the Christchurch Marathon over several years. Other fund raising efforts included acting as car-parking attendants bagging, distributing and selling firewood, picking fruit, the Hoonanza 2 day event in Hoon Hay Valley. These activities not only raised funds for the club but supported these sporting and community activities.

The club procured the rights for the sale and distribution of Christmas puddings to other Rotary clubs in the Christchurch area which provided a new source of revenue for the Club. This project was initiated in the early 1990s and became an annual event from which the club netted $3,500.

Support of the local community

In 1986/87 a major fundraising Appeal raised $142,000 for Adrienne Mackwell’s pioneering heart transplant, this was done in conjunction with the Lyttelton Club. The project gained great publicity for Rotary and its sympathetic concern for those in urgent need of specialist medical services. A Significant Achievement Award was presented to the club for its effort. The club hosted Adrienne Mackwell and her family to celebrate the 10th anniversary of her heart transplant. At the time, Adrienne was the second-longest surviving heart recipient in NZ.

In 1989 with George Begg, one of our Charter members, a Cot Death Appeal was initiated, raising $500,000 for a cot death fellowship at the Christchurch School of Medicine. The club was a leader in stimulating public support to do something about the alarming increase in the rate of Cot Deaths in the Canterbury region. This culminated in the formation of the Cot Death Appeal Trust to promote public subscription to fund a researcher. Over $600.000 was raised for this purpose.

The club also funded the establishment and furnishing of a Careers Block for Hillmorton High school. Landscaping and playground development has been undertaken by our club in recent years at Rowley and West Spreydon Primary Schools. The club distributed hampers to disadvantaged families in the community at Christmas which had to be discontinued in 2001 due to privacy considerations making it difficult to identify the needy. The Rowley Primary School swimming baths were painted; a group of 21 underprivileged children were taken for a sailing experience.

The project which the club selected for the centenary of Rotary was to establish a picnic and parking area at the Halswell Quarry.

The Club has continued to actively support its the local schools and sent students to the Siemens Science School, Young Totara Awards, Rypen, Ryla and Matched Student Exchange.

The club has contributed to Rota Homes projects in Fiji at various times in its history, sometimes sending members to help with construction work in Fiji.

With the co-operation of the Rotary Club of Tauranga-Te Papa (District 993), the club had grapefruit consigned and sold locally. The proceeds from this fund raiser assisted the club with its World Community Service project and a Significant Achievement Award was presented to the club for funding a library in Vanuatu in 1982-83.

The club collected pharmaceuticals, educational materials and a video camera for dispatch to one of the outlying islands of the Cook Islands. Medical supplies and $1000 for equipment were also sent to Rarotonga for a newly established physiotherapy clinic.

$1,000 was sent to Zululu School in Kenya to provide cupboards and storage for books. This project was made possible through a Rotary contact living in Kenya.

Material for the Emergency Response Kit scheme was also collected, packed and stored for rapid distribution in the Pacific region when needed in the event of tropical cyclones or other natural disasters.

Strong support continues for the Polio Eradication programme, as well as continuing with contributions to The Rotary Foundation and various other projects and appeals. 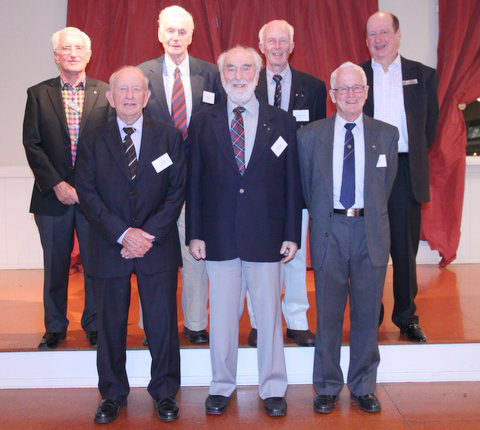